A 25m swimming pool linking the tops of two 10-storey towers is to be built in London.
The pool, nicknamed "Sky Pool", has been described as a world first and will feature a transparent bottom.
It will allow swimmers to peer down on passers-by from a height of 35m.
Eckersley O'Callaghan, the firm which has worked with Apple on the design of its stores around the world, will engineer the project. 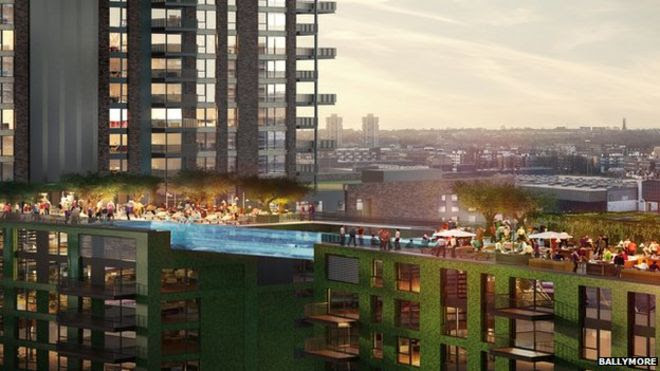 The pool is part of a luxury property development called Embassy Gardens at Nine Elms, near Battersea power station.
It's hoped that it will be complete by the summer of 2019, but the concept does not come without challenges - especially given that the pool will be subject to forces exerted on it by the two adjacent buildings, which have been constructed on separate foundations.

"They move slightly differently in the wind so one big problem is that we're trying to span potentially a fragile structure between these two buildings that are moving separately," engineer Brian Eckersley told the BBC.
Bearings will support the structure and allow for some degree of movement. However, the pressure of the water against the sides of the pool also needs to be considered.
"You've got the sides trying to burst apart as well as the weight of the water being carried by the structure," he said. "And you have to transfer all these loads to supporting buildings while they themselves have a tendency to move around relative to each other."
Mr Eckersley added that the swimming pool would not be made from glass but rather transparent acrylic - a type of plastic.
"Using acrylic, you end up with a more transparent overall structure because its refractive index is similar to that of water - you don't get that distortion at the interface between the material and water that you get with glass."
The water will be filtered to keep the acrylic clean on the inside, said Mr Eckersley, though the exterior of the pool will have to be regularly cleaned, as with many glass structures.
Using the pool will be like "floating through the air in central London", according to a statement by Sean Mulryan, chief executive of Ballymore Group, which has commissioned the pool.
"To the best of my knowledge this would be a world first - I don't know of other structural glass swimming pools elevated like this," said Sarah Fray, director of engineering and technical services for the Institution of Structural Engineers. She pointed out that there was nonetheless a long history of water carrying buildings, such as aqueducts.
"This concept is a very interesting design challenge, it's great to see the built environment pushing boundaries and creating exciting and challenging new features in the city," she told the BBC.
"One challenge will be lifting up the materials - this will probably call for a very special crane.
"Also, as a bridge, the pool will need to be able to cater for the two buildings moving different amounts."
BBC News
Posted by All About London at 10:58:00 pm